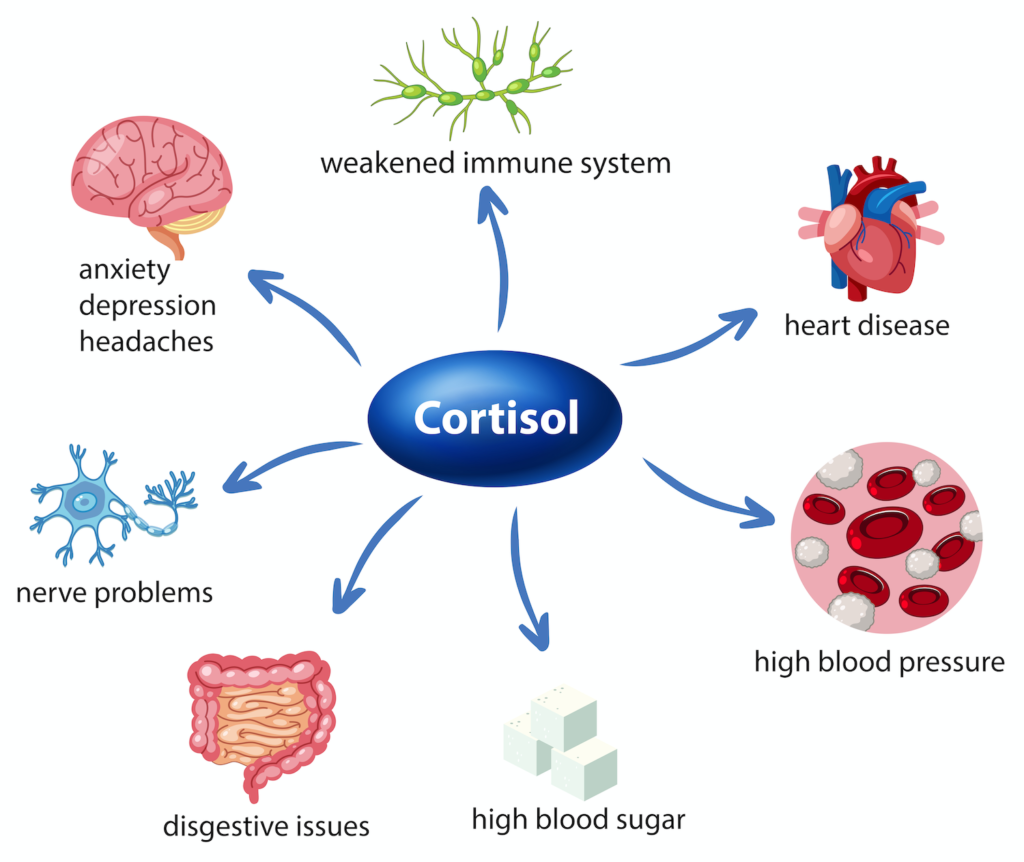 When Cortisol is released it can cause multiple problems in the body!

A List of Some of the Hormones in the Human Body

Hormones play a lot of roles in the human body. In short hormones are chemical messengers. The hormones are made in an organ and then travel through the bloodstream and body fluids to modify and control functions to organs and tissues. If you have a hormone imbalance, it can cause several problems to your health, like growth development in children, sexual development, metabolic and other bodily functions. Not getting the proper phytonutrients can alter the role of the hormone in our bodies.

ADIPONECTIN – This is a protein hormone which is involved in regulating glucose levels as well as fatty acid breakdown. Also known as the fat-fighting hormone. It helps muscles use carbohydrates for energy and also helps increase your metabolism. Monounsaturated fats raise levels of Adiponectin which in turn helps to decrease belly fat.

ADRENALINE – This is the flight or fight hormone, which gives the ability to handle danger situations. Adrenaline is mainly produced by the adrenal glands and certain neurons. This hormone increases the blood flow to the muscles. This is done by binding to both alpha and the beta receptors.

CORTISOL – This hormone is the stress hormone. Cortisol increases respiration and blood pressure and muscle tension. Too much cortisol can cause an array of health problems. When the adrenal glands release cortisol, it causes the release of a lot of glucose into the bloodstream to act as instant energy to the large muscles. It will also cause insulin to be released so the glucose will be used and not stored. Scientists have stated for years that the release of cortisol can interfere with learning and memory. High levels of cortisol can cause weight gain, depression, heart disease and more. The release of cortisol can also decrease bone formation. Cortisol has been shown to weaken the immune system by preventing the proliferation of T-cells. This hormone can also inhibit the formation of collagen.

DOPAMINE – Is the feel-good hormone, it tells the brain that this feels good and to repeat the things that make you feel good. Dopamine functions as a neurotransmitter, which is a chemical released by neurons to send signals to other nerve cells. It releases when having sex and when eating.

ESTROGEN – Produced mainly in the ovaries, is the primary female sex hormone and is responsible for the development and maintenance of the female reproductive system.

GASTRIN – Is a peptide hormone that stimulates the secretion of gastric acid (hydrochloric acid) from the stomach lining.

GHRELIN – This is the hormone in the gut that signals your brain to say you are hungry. People that have higher ghrelin levels may help in preventing weight gain.

GLUCAGON – Produced in the pancreas, this hormone does the opposite of insulin. When blood sugar levels drop, this hormone breaks down the stored glucose and uses it for energy.

GROWTH HORMONE – The growth hormone is produced in your pituitary gland. This hormone is needed for helping increase bone and muscle strength in women. Deficiencies in this hormone as a fetus can lead to dwarfism.

IRISIN – A hormone when it is released it converts white fat cells into brown fat cells. This hormone is also called the exercise hormone. Research states that higher levels of irisin show a reduced risk of cancer, heart disease, and other age-related diseases.

INSULIN – Is a peptide hormone produced by the pancreas. It is needed to allow the body to use sugar from carbohydrates. It also keeps the blood sugar levels from getting too low or too high. !!!!! Attention the primary role of insulin is to transport glucose out of the bloodstream and into tissues!!!!!!!!!! Hopefully, this will help people understand that the low carb diets are bad for you in the long run. Please do not put your children on a low carb diet if they are overweight!

LEPTIN – This hormone is produced in your fat cells and signals the brain after you have been fed that you are satisfied and can stop eating. This is the opposite of the hormone ghrelin.

MELATONIN – Is a hormone made in the pineal gland and regulates sleep and wakefulness. There is research that states when melatonin is released cancer cell growth is suspended.

OXYTOCIN – This is the hormone that makes us feel closer to each other otherwise known as the bonding hormone. The more we touch, the more the release of this hormone.

PEPTIDE YY – This is the hormone produced in the small intestine and then released into the bloodstream that makes you full after you have eaten.

PROGESTERONE – Is a hormone that is a significant part of the menstrual cycle. This hormone rises after ovulation.

PROLACTIN – This is the hormone that triggers lactation and starts the breastfeeding process.

SEROTONIN – Is the mood hormone. It sends signals between your nerve cells. If levels of serotonin are too low, it can lead to depression. This hormone also helps with learning and memory functions, sleep and digestion. Most of the serotonin is produced in the gut. A 2007 study showed that low levels of serotonin could lead to anxiety and insomnia. There is research that has shown eating dairy cheese (BCM-7 Casomorphins) can interfere with the serotonin receptors.

TESTOSTERONE – This hormone is needed to help with your sex drive, also helps with muscle strength and bone density.

THYROID HORMONES – The thyroid is responsible for the release of thyroxine (T4) and triiodothyronine (T3) to control your metabolism. There is research that shows some of the dyes can be harmful to the thyroid functions.

The hormones listed above are only some of the hormones found in the human body.